A pop up storm can cause us to walk a tightrope and really highlights the interdependence of the groups that care for and protect our beaches.

History shows us that a tide of more than 3.5 feet above average puts our lifeguard towers at risk, which potentially could cost several hundred thousand dollars. It’s also been demonstrated that if we wait too long to get down there and move the towers, we can reach the point of no return where the equipment to move them can’t get down there, and high water, strong winds and sometimes lightning can put our crews at undue risk. The problem is that the farther we are out from the weather event the greater the degree of uncertainty.

This week really demonstrated how this works and how much we rely on our partners. Our friends at the Houston/Galveston National Weather Service predicted terrible weather headed our way. By terrible, we’re talking about up to 10 inches of rain in some areas, potential lightning, hail, and tornados, and tidal surge coupled with 30 mph winds and offshore waves of up to 15 feet. Bad. But the tides were only predicted to be around 3 or 3 ½ feet, which under “normal” circumstances wouldn’t warrant all the trouble, expense, and potential damage that moving all 31 towers off of the beach would incur.

The NWS office put out updates every few hours and we, as well as the other public safety agencies and city staff, had been following them closely. Our Emergency Management Office kept checking to make sure we all had the latest info as well. I can’t really adequately explain how much the NWS crew does for us and all the other groups they work with including the general public. One example is that one of the guys up there who is also a friend sent me a text late Monday evening saying that the projected offshore wave height had increased and that there was a good chance that on the beach the waves and wind could push that maximum tidal height up even more and could potentially cause the water to reach the base of the seawall. Talk about a hot tip!

So, at 10:30 at night I called Jesse Ojeda, who heads up the Coastal Zone Management Department of the Park Board. Without hesitation his answer was, “We’ll start at 5am”. Wow! By the time I checked with him at 6:30 they’d already gotten half of them up to the top of the seawall where they’d be safe. And since the wind wasn’t going to blow harder than about 30mph we didn’t have to truck them all the way to another part of the island.

Good to have friends! 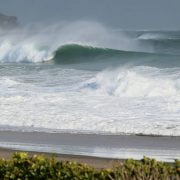 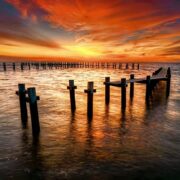 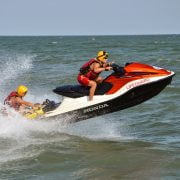