Here we go! Another beautiful, busy weekend has passed. With no seaweed, perfect water and air temperature, and large well-behaved crowds, it’s no wonder our property values have risen so much! Technically, that should be the last big one of spring break, but I have a feeling that if the weather holds, we’ll be looking at busy weekends until the summer madness kicks in. We’ve been reviewing stats and staffing patterns and the reality has set in that Galveston’s beaches are busier earlier and later than they were just a few years back. Last weekend looked like a weekend in June. Again, our luck held with calm few incidents, even though we were busy with small stuff all weekend. Over Spring Break, we ended up with 5 rescues and a 4,153 actions where we moved people from dangerous areas.

The action is showing no sign of slowing. Sunday, April 3, is the Memorial Hermann 70.3 half Ironman event. We’re working with the Ironman staff, the Galveston Police Department Marine Division and Jamaica Beach Fire Rescue to provide water security. With around 3,000 registered participants it’s going to be a huge event and a big deal for Galveston. We work the watercourse with a modified version of how we guard the beach. Lifeguards work on rescue boards, so they can sit above the water to spot people and have floatation for all the swim assists and rescues we typically make during the event. Other guards work on “jet skis” to cover a zone of several guards and we call them Personal Watercraft Crew (PWC). Lifeguards communicate with PWC crews and each other using a combination of whistles and hand signals, which are the same ones we use on the beach front. The PWC operators have waterproof radio headsets so they can communicate with an “incident commander” on the shore. This capability affords the ability to triage patients in the water and quickly pass information to the incident commander, EMS, and the Ironman workers who know the racers’ numbers and vital patient information. Most of the people rescued are tired swimmers, but we can experience more serious cases that go directly to the EMS crews. At the end of the race, the lifeguards and police divers stay on the water until the Ironman staff confirms that all swimmers have been cleared of the water using the numbers we provide and electronic chips that register racer numbers as they run across a mat at the end of the swim.

Last Saturday, we held our first lifeguard tryouts of the season. The next one is in May. Out of all the applicants, four made it through the tryouts and demanding lifeguard academy. We also had a decent number of returning lifeguards requalify and, for those in leadership roles, go through their annual retraining in rescue techniques, report writing, advanced level CPR, and PWC rescue. The tower guards will renew their CPR qualifications along with those who return in May.

Another season is upon us and we’re all ready for another wild ride! 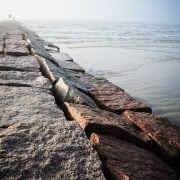