Have you been to the western edge of the seawall? If not, swing by and check it out. As you look west you’ll see… a big new beach!

This project, the first and smallest of three scheduled to happen this year, has completed 80,000 of the planned 118,000 cubic yards of sand planned. It’s a vulnerable area with the fastest eroding beach on the island. Among other things and for obvious reasons, it’s the first area our Emergency Operation Center worries about during times of flooding from high tides.

The parts of the project that relate to ensuring we get beach quality sand placed with a minimal margin of error are interesting. Sand sources are permitted through the US Army Corp of Engineers and are subject to a rigorous review which includes input from various regulatory agencies, including US Fish and Wildlife, Texas General Land Office, US Army Corp of Engineers, Texas Commission on Environmental Quality and others.

The sand is being dredged from the bay side of the island and is being moved to the site by trucks, where it is then piped to a specific location.  As is typical in a dredge project, a bit of other material has ended on the beach.  Monitors have been placed on each end of the pipeline and debris is being removed as it becomes apparent.  Teams are reviewing the beach daily and collecting any debris that escapes the monitoring process.

Although all the sand placed on the beach will eventually no longer be easily evident, a significant portion will remain visible. The rest migrates out to the area of the third sandbar and sits in about 10 feet of water. Many of you will remember back in the mid 90’s when we did that giant nourishment project on the seawall. At first the sand was all the way out to the end of the jetties, but eventually settled about a third of the way out. The rest stays near shore and moves around.  This movement of sand contributes to the development of an overall healthy beach and was taken into account in the design for the beach profile.

Eventually the long-shore current moves some sand to other parts of the beach. Beaches are dynamic and evolve over time.  In the winter, sand moves out to near-­shore bars.  The gentle waves of summer then return sand from the bars back to the beach.  Beach nourishment will not stop the shoreline from receding in eroding areas, but it will delay it.  Beach nourishment increases the life span of the shore and prolongs the benefits that beaches bring our island.  Around the country the majority of tourist beach areas are periodically re-nourished because the revenue they bring in and the infrastructure they protect far exceeds the re-nourishment costs .

This project is the beginning of a 50 year sand management plan designed by the Engineering and Research Development Center of the US Army Corp of Engineers and will hopefully mark the beginning of an ongoing, periodic process by which we can protect and maintain our delicate shoreline.

Help Artist Boat restore a dune destroyed by Ike this weekend! They’re looking for volunteers who would like to participate in our dune planting events this Saturday, February 21st, from 9:45 AM-2:30 PM and Sunday, February 22nd, from 12:45-5:30 PM. Please contact Nate Johnson at (409) 770-0722 or at [email protected] to register for an event! 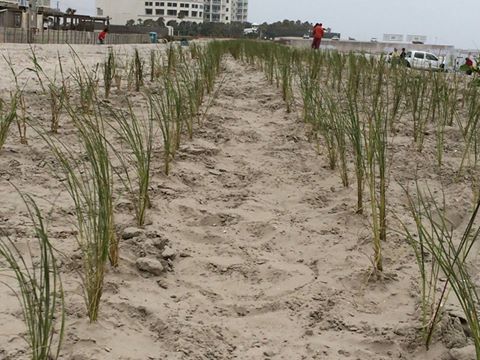