Galveston city and county have a history of resilience. Despite our mercurial weather and politics we somehow manage to pull together when we need to. Many of those of us living here now have ancestors that rebuilt the city after the 1900 storm and erected the physical embodiment of that resilience and willingness to take on seemingly insurmountable tasks together when needed.

Only a few years back we once again proved that those qualities are still just as strong when we worked together to rebuild our communities after Hurricane Ike. We couldn’t have gotten as far as we have so quickly without governmental help, but much of that recovery happened by neighbors helping neighbors.

The wounds left by Hurricane Ike are diminishing, although we have a long way still to go before the physical and psychological damage is healed. Enough time, however, has passed that we’re already losing some of the institutional memory that our decision makers from that time had. How do we, as a community, keep the myriad of lessons learned despite the changes in city leadership and as people in key roles from that experience cycle out?

In a very forward thinking move, many of our city and county leaders attended an emergency management course at the FEMA training center in Emmetsburg, Maryland last week. It says a lot about the current leadership that they realized the importance of taking all of these busy, important people away from their duties for an entire week with the purpose of preparing them for how to deal with all stages of a catastrophic event, from emergency response all the way through debris management, restoring infrastructure and financial and psychological recovery.

The course itself was intense and even included three “table top” exercises that lasted several hours where we had to work together to address different problems that arose. A central theme that was repeatedly stressed was the importance of relationships and communication in getting a jump on both the response and recovery phase. It helped that we were locked into a compound in the middle of a blizzard! What little time was spent out of class was spent together continuing course discussions.

Meanwhile, back at the ranch, a group of Beach Patrol supervisors were taking their own course in disaster response. Kara Harrison, Josh Hale, Mary Stewart, and Kris Pompa went through a grueling swift water/urban flooding course in San Marcos. They spend 4 long days and one night in wetsuits learning swift water rescue techniques, search and recovery, and how to respond during a flood. This meets a goal we’ve been working on for some time on the Beach Patrol. We now have every full time member certified as a “Swift Water Rescue Technician”, which will prove invaluable to our community when we have our next flooding incident.

We don’t know when but we all know there will be another big one. The challenge is to keep the skills and institutional knowledge ready for that eventuality. Being prepared takes work, commitment, resources, and community buy in, but it’s essential. 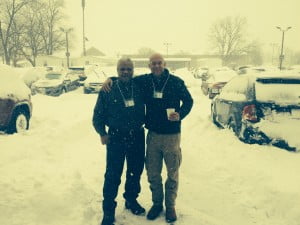 Tommy Lee of GEMS and Peter Davis of GIBP at FEMA training camp in Maryland, 2014.