Ben Carlson, a 32 year old lifeguard from Newport Beach went out on a fairly routine rescue last week just off Balboa Peninsula. He jumped off the back of a rescue boat and made contact with his victim just as a big set of waves hit both men in the impact zone.

Ben was a very experienced waterman. He competed in beach lifeguard events regularly, was a big wave surfer, and a high level college swimmer. He was one of the top athletes that worked for Newport Beach, which is in the epicenter of USLA lifesaving talent. Throughout his decade and a half career he made several hundred rescues.

The waves were reportedly 6-8 foot, which means the wave that hit him likely had a 12 foot face. Other lifeguards were able to rescue the victim when he surfaced, but Ben didn’t come back up. Any water rescue is very risky. One small thing like getting poked in the neck or choking on water can mean the difference between the rescuer surviving or not making it. But with that much water moving around there’s a million ways that rescue could have gone wrong.

One of my best friends is Rob Williams, who is Chief of the Newport Beach lifeguard service. We’ve known each other for years through the United States Lifesaving Association. Currently he is the Treasurer and I’m the Vice President. He, their Beach Patrol, and the community is going though one of the worst things that can happen to a group- the loss of a hero. From the sound of it Ben was everything you’d want in someone to represent your community. I hope we never have to go through that here. Rob and I have had several conversations about the inherent risks of the job, how many people our beaches deal with annually and the odds of something like this happening.

Lifeguards from all over California, surfers from the region, Ben’s family and friends, and many others participated in a traditional “paddle out” ceremony last Sunday. This is a way for surfers, lifeguards, and other water people to celebrate the life of a fallen comrade. Some say its origins come from ancient Hawaiian culture, but most historians believe it has its roots just after the turn of the 20th century. Wherever it came from it is practiced all over the world where there are beaches. It usually involves people paddling out on a surfboard or other craft, forming a circle, telling stories, and putting flowers in the center. Sometimes ashes are put in the water. The ceremony can be religious or secular in nature.

Ben’s paddle out was exceptional. According to the LA Times 5,000 people watched from the pier and shore and there were approximately 2,500 people in the water. There’s a really well done video that’s worth a look at https://www.youtube.com/watch?v=bEpHEaGQUUI&feature=youtu.be . This may be the largest paddle out ceremony in known history.

There is no more fitting way to say good bye to a water person. 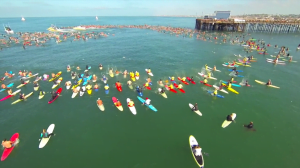