The first weekend after the clock ran out on our Seasonal Lifeguard coverage was something else. As we say people were “all down up in that beach”. They were in the water, on the sand, driving around in golf carts, trying to swim in the no swimming areas by the rocks and at the ends of the island, and anywhere else you can think of.
It was a challenge keeping everyone safe while working from the 5 scheduled lifeguard trucks. Not having guards stationed at fixed locations watching to make sure people stayed away from the dangerous areas forced to trucks to stay constantly moving. I was proud of how hard our staff worked. But even with that we still had some near misses. By the end of the weekend we’d made 8 rescues and moved over 1,400 people out of areas near the rip currents by the rock groins.
The thing that saved us (and a lot of people) was that the water was calm. Generally, we have fewer problems when the water is calm or very rough. The toughest time to guard is when the water looks pretty safe but isn’t. A prime example would be a day with small surf but with longshore current that pulls people parallel to the beach.
Longshore, or literal, current is dangerous for two reasons. The first one is that if it runs for awhile it digs deeper troughs between the sandbars, which means steeper drop-offs closer to shore. This can be especially hazardous to children; whose parents think because they’re close to shore they’re safe. It also can mean more lost kids who drift down and come out down the beach with no familiar reference points.
The second danger of a longshore current is that, when it comes into contact with a structure like a pier or groin, strong rip currents can be generated. This means that on both sides of a structure people who are in the water near it will be pulled offshore into deeper water. If they try to swim against it, people can tire, choke on water, panic, and go under. 80% of the rescues beach Lifeguards make both locally and nationally are a direct result of rip currents.
We’ve probably got another month before the water temperature drops to the point that it keeps the recreational swimmers out. And lately it seems that the season stretches farther and farther into the winter months and more and more people are using the beaches. So we’ve definitely got some work ahead of us before we can divert attention to our winter tasks of refurbishing all the towers, repairing equipment, training our full time staff for the next season, and lots of other things we’ve put off until the beach is not so pressing.
All that said, please find some time to come to the beach during a time of year that the water and air temperatures are absolutely perfect, without the pressure of summer crowds. Just remember to be safe! 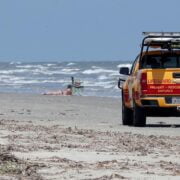