Rip currents, which typically pull people perpendicular from shore, are the cause of 80% of drowning death in beaches both in and outside of the USA. In Galveston, we are lucky because rip currents mostly occur right next to the rock groins. That’s why we have signs and ropes near the rocks and why we place the lifeguard towers near that area. Each year we move around 60,000 people from dangerous areas, the majority of which are near those rocks.

Since the water carries you out but nothing pulls you under, there are some clear ways to get yourself out of a rip current. If you relax and float the current will usually pull you out to the end of the groin then back around to the shore. If possible you can call or wave for help. If you are a good swimmer you can try swimming parallel to the shore and if you are able to clear the area with the rip current it is easy to get back to shore. If you see someone in a rip current you should never go after them unless you have proper equipment and training. Instead try throwing something that floats connected to a rope, like the ring-buoys and throw bags we have in the rescue stations on the end of each groin. Or if they’re close you can extend an object (towel, stick, fishing pole) to them and pull them up.

For about a decade I’ve been involved, as a representative from the United States Lifesaving Association (USLA), with a group that developed a body of information to educate the public about the dangers of rip currents. This group includes the USLA and the National Oceanographic and Atmospheric Administration, specifically the National Weather Service (NWS) and Sea Grant. Over the past couple of years another group has been meeting to design a pilot project where lifeguard agencies are partnered with their local NWS office and give feedback on how accurate the new science of rip current predictions on specific beaches. This partnership between the NWS and USLA agencies has grown to about 25 groups and, after an evaluation period will likely expand throughout our nation’s beaches

Last week the NWS had a conference in Virginia. NOAA brought another USLA representative and I up to a “Coastal Resiliency Workshop” where over 100 researchers and weather forecasters spent three days together listening to presentations and dialoguing in workshops about the best ways to protect our nations beach going population from rip currents in a consistent and proactive manner. Both of the USLA presentations were really well received and it was encouraging to see this marriage between theoretical science and practical applications take shape. As lifeguards our primary mission in protecting people from the dangers of rip currents and other beach and ocean hazards. Being able to provide on the ground data that will eventually lead to accurate rip current predictive models is a real privilege, as it will ultimately lead to lives saved. 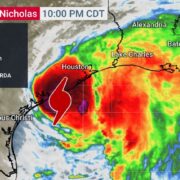