The orange ball of the sun balanced on the horizon line, mirrored in the glassy water. The world was silent, except for the faint sound of the surf ski slicing through the water, and occasional gulls as they flew by.

When the water is glass, a surf ski, which is essentially just a skinny fast kayak, really comes into its own as you skim across the water. As I settled into my workout, I fell out of time for awhile until, much later, movement caught my eye. The sun was a bit higher and I was about a mile or so offshore paddling parallel to the island when I noticed shadows passing beneath me. As I looked closer, I realized the water was exceptionally clear and I could see a school of cow-nosed rays passing beneath me. A few minutes later I saw more and then again more. All in all I must have seen 40 or 50 of them.

I like training early on the beach. An empty beach is a really different thing than a crowded midday one. You see things you’d never notice when the press of humanity and the operational needs of the Beach Patrol combine. This past week has been extraordinary because we’ve had some of that rare, super clear water we only get from time to time. While swimming in 10 feet of water you’ve been able to see the ripples of the sand on the bottom. While paddling a board you can see fish below the surface. The only bad part is that for those who spend a bunch of time in the water it’s a bit unnerving to actually see all the animals that you know are there, but don’t have to think about because you rarely see them.

Just the right set of conditions of a gentle east wind causing a slight east to west current with no surf came together to make this happen. The seaweed even stopped coming in, at least temporarily. I’ve noticed the few beachgoers we’ve had the past few days often wade out to shoulder deep water and stop for long periods looking down at their toes and small fish swimming around.

One of the good and bad things about living here is that it’s such a dynamic environment. The bad part is this beautiful water will be gone soon. But the good part is that we’ll be seeing cooler weather, maybe some surf, and soon this mosquito infestation will be over!

The weekends will still be busy for quite some time but the weekdays in the fall are finally here. Locals, this is your chance. Time to go to the beach without all the hubbub and be reminded that one of the best things about living here is the ability to enjoy this incredible environment we all take too much for granted.

Even if you don’t go to the beach it’s now safe to drive down the seawall. At least on the weekdays when drivers stay in their own lanes for a change! 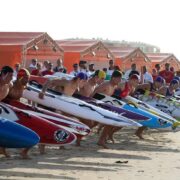