I was very, very fortunate last week to get to spend time with a personal hero. A man Molly Ivins once called a “White-Maned Pixie” who needs no introduction. A. R. “Babe” Schwartz joined a group of Park Board staff members and Texas General Land office representatives to take a tour of Galveston’s beaches.

As we bumped across the beach, former Senator Schwartz regaled us all with one hilarious story after another while somehow tracking every conversation on the bus and chiming in anytime he felt a discussion needed a prod in the right direction. By “prod in the right direction” I mean anytime anyone needed to be reminded that Texas beaches are for all Texans to enjoy and legislation was put in place to ensure that. Babe Schwartz ought to know. A few of his many, many accomplishments that affect us here locally include the Texas Open Beaches Act, setting up the Park Board of Trustees as a vehicle to make sure tourist generated resources remain on the beach and are used to attract tourists, and ensuring Beach Patrol and Beach Maintenance are provided what they need to keep the beaches clean and safe for tourists and locals.

Now in the latter half of his eighties, he’s slowing down a bit. But his mind is sharp as a tack, his sense of humor better than ever, and he has every bit of the same grit and charisma that characterize his long and unbelievably productive career.

When we were alone he told me about what it was like to work Stewart Beach as a lifeguard in the ’40’s, and about surfing during those days when the sport was young to the western world. Even after all this time, his love and enthusiasm for the beach and the ocean shone through as he talked. A true waterman never loses that and it was evident in the timber of his voice and the way his eyes shone when he reminisced about that time. Funny how the beach never really lets you go once it gets its hooks in you.

When he was turning 70 he decided to have a beach party. He was going to paddle out in front of his friends and family and catch a wave or two just for kicks. Unfortunately on that day the water was like a “mirror stretching all the way to Mexico”. He missed 80 for some reason and said he’s looking at repeating the plan when he turns 90 in a few years.

Later that day I was standing at the shoreline at Stewart Beach looking at the guards and the people playing in the water on a beautiful Spring Day. I took a moment just to enjoy the feel of it. I realized that Babe Schwartz likely did the same thing in the same place 70 years before. If we respect the measures he put in place a lifeguard will do the same thing on a beautiful, maintained, and well protected beach 70 years from now. 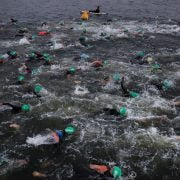